(This story first appeared in Paddler Magazine in May 2021.)

The international paddling community recently lost one of its most prominent visionaries and an irreplaceable icon. On March 23, Rafael Gallo, founder of Costa Rica’s Rios Tropicales rafting and adventure company and the International Rafting Federation’s first Honorary President, passed away at the age of 62 after a 14-month battle with pancreatic cancer. Upon hearing this news, via social media posts and word of mouth, people from around the world have shared their deep sense of loss and enduring love for “Rafa.”

In a tribute to Rafa, the International Rafting Federation (IRF) stated: “The IRF, and indeed the entire rafting world, has been deeply saddened by the passing of Rafael Gallo, Honorary President of the IRF. The outpouring of messages has been huge and an indication of the respect that so many held for Rafa. A true show of the vast number of people from all around the world whose lives he touched with his positive energy. From the forefront of rafting to a global leader in conservation strategies and engagements, Rafa’s life achievements will not be forgotten.”

IRF President, Joseph Willis Jones, commented as a personal friend and on behalf of the IRF: “It’s hard to see the rafting and environmental community lose such an impassioned leader and individual. Rafa’s been someone who I’ve greatly admired and respected for all that he has accomplished during his remarkable life. His successes in protecting Costa Rica’s ecosystems and especially his beloved Rio Pacuare would have satisfied the goals of most people years ago. But for Rafa, enough was never enough because he could see there was always more that could be done. Rafa never shied away from any project, no matter how big or small, if he believed that it would benefit a river, or the sport of rafting, or the environment.”

Rafa is known all over the world for his role in promoting rafting and kayaking. He championed improving worldwide rafting safety standards and helped create a guide training and education system compatible with river rafting anywhere. He has a host of first descents to his credit, both by kayak and raft, and was inducted into the International Whitewater Hall of Fame in 2009. He was also Costa Rica’s first-ever member of the prestigious Explorer’s Club of New York. 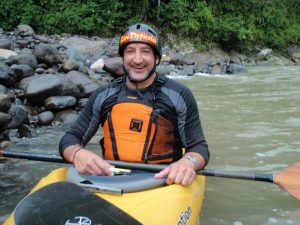 A Founder of the IRF

Rafa is a founder of the IRF, serving as its first vice-president from 1997 to 2006 before leading as president from 2006 to 2013. He stepped down from the presidency to focus more on conservation and sustainability, one of his strongest life passions. Commending his decades of involvement, achievements, and integral role in the formation and development of the IRF, Rafa was named its first Honorary President in 2018.

A natural and charismatic leader, Rafa pioneered both adventure tourism and ecotourism in Costa Rica with his company Rios Tropicales, which won dozens of international awards for conservation practices throughout its 35-year history. He put Costa Rica on the world map for whitewater rafting and kayaking, and even helped stop a hydroelectric dam on his beloved Pacuare River in 1990.

Rafa’s life reads like an adventure novel. He was born in the United States in 1958 to Salvadoran parents, while his father was getting his master’s degree in soil science at Cornell University. When Rafa was less than a year old, he rode with his parents in their station wagon from New York to San Salvador. There, he grew up on his family’s country estate in the city’s outlying foothills.

During Rafa’s second year at university, due to El Salvador’s worsening political situation, his parents sent him to the University of Tennessee (UT) to continue studying industrial engineering. Childhood friend and fellow student Jimmy Nixon introduced Rafa to the UT Canoe and Hiking Club, thus igniting Rafa’s lifelong passion for paddling. His group of university paddling friends became like a second family. Calling themselves the “Tenth Street Paddlers”, their 40+-year friendship was a source of immense support for Rafa, up to his final moments.

His first river running experience was paddling a Morrison Hahn C-1 on a class IV river with zero know-how. Jimmy had given Rafa basic instructions and simply said, “follow us.” Rafa, always game for an adventure, did his best. Nevertheless, he swam the first rapid and broke the fiberglass boat. After a few more river trip misadventures, club member Tom Wise took pity on Rafa and taught him how to roll a kayak. They celebrated the one-day achievement with a moonlight paddle down the Little River in the Smoky Mountains National Park.

A few years later, after graduating, learning to raft guide, and a life-changing 18-day river trip through the Grand Canyon, Rafa left his industrial engineering career to paddle the warm water rivers of Costa Rica. He was enchanted by the Pacuare River and the exuberance of the rainforest, enticing him to call the country home.

In 1985, he co-founded Rios Tropicales, along with Jimmy Nixon and another childhood friend. Their mission was to share the magnificent rivers and rainforests of Costa Rica with all people in a way that protects and sustains the environment and local communities. Rios Tropicales became a leading, world-class, award-winning adventure company dedicated to conservation. They won National Geographic’s 2008 Geotourism Award and the Best Outfitter in the World award, and Skål International’s 2014 Sustainable Tourism Award, among many others. 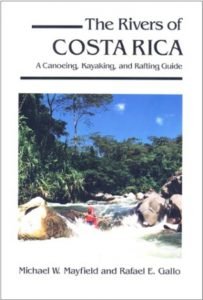 Along the way, Rafa co-authored “The Rivers of Costa Rica” with university friend and fellow paddler Mike Mayfield in 1988. He worked inclusively with the Cabecar indigenous people in the Pacuare region, teaching the first Cabecar rafting guides and employing local community members at his jungle eco-lodge that he built alongside the Pacuare.

Never one to sit still, Rafa headed up the Costa Rica Sports Association for Adventure and Paddling, served as president of the Costa Rican Network of Nature Reserves from 2007 to 2017, was a board member of the Biodiversity Partnership Mesoamerica alliance, and was appointed as an honorary member of Costa Rica’s Blue Flag Program National Commission.

Planting dreams wherever he went, Rafa continually embraced new adventures and life-changing aspirations with his driving passion, affecting untold lives, communities, and the natural environment every step of the way.

Rafa was passionate about protecting the environment and operating his business in harmony with nature. He believed strongly in leaving a better planet for his three kids and future generations.

Over the past three decades, Rafa and his family created the largest private rainforest reserve in the Pacuare River valley. Today, the Gallo family holds 2,500 acres in their private reserve, which includes primary rainforest and cut areas that have been reforested. Almost 31,000 native hardwood trees have been planted, regenerating the forest habitat and biodiversity. Great Green Macaws, which had disappeared from the region, have returned thanks to hundreds of planted mountain almond trees – the Macaws’ principal food. Ocelots and jaguars, which are endangered in Costa Rica, also have returned to the region.

As a result of Rafa’s far-reaching conservation achievements, the Costa Rica National Alliance of Rivers and Watersheds named a new environmental award after him in 2019 – the Rafael Gallo Palomo Award, Safeguarding the Future of Our Rivers.

Going even further, Rafa adopted the role of IRF Ambassador for Peace in 2018, traveling to Colombia’s remote San Vicente del Caguán region to work with the United Nations Peacekeeping Mission to help with the social reintegration of ex-guerrillas by training them in rafting. Thanks to Rafa’s efforts, the resulting “Rafting for Peace” team represented Colombia at the 2019 IRF World Rafting Championship in Australia. Rafa was recognized for the extraordinary achievement with the Sustainable Actions Award for Peace at the 2019 Planet, People, Peace conference in Costa Rica.

COVID-19 Pandemic and the End of an Era

Rafa is well known for his overflowing, open-handed generosity. After 35 years, his company Rios Tropicales closed on February 1, 2021, due to the economic crisis that resulted from the global COVID-19 pandemic. Instead of simply closing doors, Rafa handed his legacy to trusted former Rios Tropicales guides, who formed their own new rafting company, Rios Adventure Travel. Those guides are five brothers who planted seeds as kids with Rafa to reforest their family’s farm, which Rafa bought in 1990 to build the Rios Tropicales Lodge alongside the Pacuare River. They grew to become the company’s top rafting guides and managers.

In the official press release about his company’s closure, Rafa said, “As for me, I am retiring from being an adventure company owner to focus my efforts on my deep love for conservation … now it is time to grow an even larger conservation initiative in the Pacuare River region. RAFA – the Rivers and Forests Alliance – will continue to spread the positive impact we have made for the rainforest, biodiversity, the Pacuare River and watersheds, rural communities, Costa Rica, and the planet.”

In his final months, Rafa worked hard to outline and communicate his conservation dreams of environmental stewardship and protection of his beloved Pacuare watershed region. Rafa planted the seed, and now his family and friends have united to develop and grow the Rivers and Forests Alliance (RAFA) in his honor. His dreams will live on in an enduring legacy. Those wishing to follow or participate in RAFA can find more information at www.riversandforestsalliance.org. 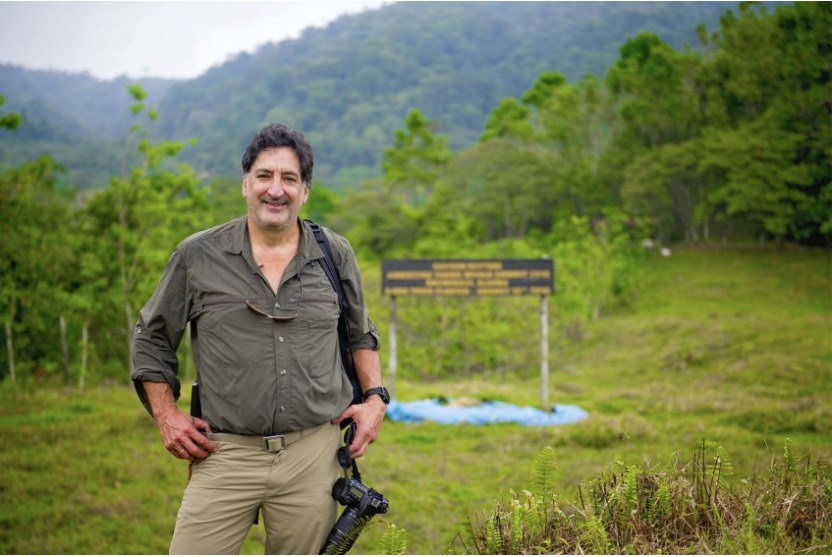